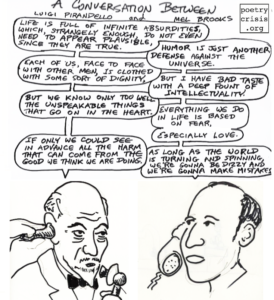 Happy birthday to Luigi Pirandello, who is 154 years old today, and Mel Brooks, who is holding steady at 2000.

LUIGI PIRANDELLO: Life is full of infinite absurdities, which, strangely enough, do not even need to appear plausible, since they are true.
MEL BROOKS: Humor is just another defense against the universe.
PIRANDELLO: Each of us, face to face with other men, is clothed with some sort of dignity,
BROOKS: But I have bad taste with a deep fount of intellectuality.
PIRANDELLO:  but we know only too well the unspeakable things that go on in the heart.
BROOKS: Everything we do is based on fear, especially love.
PIRANDELLO: If only we could see in advance all the harm that can come from the good we think we are doing.
BROOKS: As long as the world is turning and spinning, we’re gonna be dizzy and we’re gonna make mistakes.