The poet Jacques Prevert was born 121 years ago today.

232 years ago, George Washington was elected the first President of the United States of America.

I haven’t looked into whether any notable events occurred 343 years ago today. This one got away from me enough already. 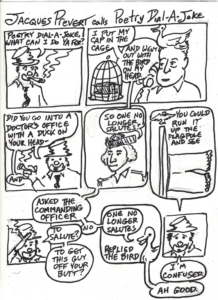 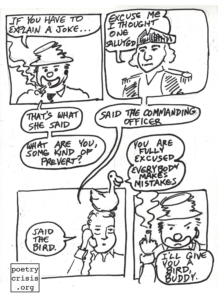 Based on “Quartier Libre” by Jacques Prevert

LUCKY (operator): Poetry Dial-A-Joke, what can I do ya fer?
JACQUES PREVERT (caller): I put my cap in the cage and went out with the bird on my head.
LUCKY: Did you go to a doctor’s office with a duck on your head and—
GENERAL WASHINGTON (commanding officer, as quoted by PREVERT): “So one no longer salutes?”…
LUCKY: You could run it up the flagpole and see.
PREVERT: …asked the commanding officer.
LUCKY: To salute?
DUCK (as quoted by PREVERT): “No…”
LUCKY: To get this guy off your butt?
DUCK: “…One no longer salutes”
PREVERT said the bird.
LUCKY: I’m confused.
DUCK: “Ah good.”
LUCKY: If you have to explain a joke…
WASHINGTON (quoted): “Excuse me I thought one saluted”
LUCKY: That’s what she said.
PREVERT: …said the commanding officer.
LUCKY: What are you, some kind of prevert?
DUCK: You are fully excused; everybody makes mistakes.
PREVERT: …said the bird.
LUCKY: I’ll give you a bird, buddy.

But honestly, if that’s all you’re wondering about this post, then you’re doing better than I am.